While the good men and women of Rum & Reviews are often called upon to put their livers on the line in the call of duty, we are rarely tasked with testing cures for hangovers, which is surprising given our work. Most hangover remedies tend to vary from the disgusting to the laughable, so being tasked with testing one that claims to be scientifically proven to work is a rare thing indeed.

I admit to being sceptical about Alcotox from the outset. The press release misspelled cancer, the packaging looks ropey, and pills themselves appeared to be for a horse. They smell of yeast and look like they are full of sawdust. But there was Science to be done, and drinking in the name of Science is possibly the finest of all manly pursuits.

I settled on an intensive ‘stress-test’ as it were, and put the supposedly miraculous powers of Alcotox up against six of the finest and strongest IPAs I could lay my hands on.

Following the instructions to the letter, I took two before drinking, one before every subsequent drink, and two after my last beer of the evening. The instructions dictate that water should be drunk with the pills, and regularly. Before I had even started, I knew my hangover would be reduced, simply because I would be hydrating myself constantly throughout. There were no noticeable side effects during the test.

After about eight hours sleep, I felt pretty good. There was some mild headache symptoms for a couple of hours, but certainly a hell of a lot milder than I was expecting. If Alcotox are, as they seem to be, basically vitamin supplements, then frankly I would expect consuming them and lots of water would reduce the effects of any hangover. However, I could get vitamin supplements from anywhere, and for significantly cheaper than £14.99 for a bottle of 24*. The real question is if Alcotox does, as it claims to, reduce the harm to your liver. If that’s proven by clinical trials, then fair enough. Until then, it’s too expensive and too impractical to become a part of anyone’s regular social drinking experience. Knocking these back with glasses of water in a pub or club is bound to attract the wrong sort of attention.

Not so much a crushing victory for Science then, but an intriguing product if its claims can be verified.

Some time ago the idea of the Rum and Reviews gang testing out an anti-hangover supplement was mooted, and as I approach thirty and hangovers seem to beat me up harder each time I leapt at the chance, keeping in mind that, as several of my friends pointed out to me, they “probably wouldn’t work”.

I already have a sure fire hangover preventer (other than the dreaded and draconian “not drinking”) which takes the form of ordering an horrifically greasy 14” stuffed crust meat feast pizza at two or three in the morning and inhaling it before I go to bed. This poses a few problems though; first among them is that if I use this powerful healing spell more than once a month my shirts tend to get a bit tight, and also pizza isn’t the cheapest of commodities.

A magic pill that meant that I didn’t have to suffer the agony of hangovers and the irritation of upsizing my workwear collection would be mana from some kind of alcoholic heaven, and I was a little disappointed that hovering cherubs didn’t appear and shotgun beers while the Post Office clerk handed over my “medicine”, a supplement called Alcotox that boldy claims on its label to prevent hangovers.

My first impression on opening the bottle was that Alcotox stinks. Even with the film covering still in place the retch-inducing yeasty smell of the capsules was mildly overpowering. Once I had put my guts back in my body and torn away the plastic sealing the bottle’s neck I was greeted by the sight of a bottle full of Hollywood narcotics. I’ll get onto Alcotox’s actual performance soon, but irrespective of this stuff’s efficacy I would never risk taking a single one of these tablets in public. It’s easy to imagine Steven Seagal yanking a big plastic sack of these from some dirtbag’s jacket before giving him some excessive street justice. Bear in mind that the guidance advises you take one capsule for each drink, and begin and end the night with two capsules, and be aware that you’re going to look like an action movie drug dealer. 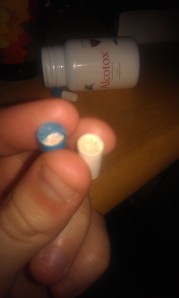 I was aware that Chris Hall’s plan for his experiment was to test Alcotox’s abilities against a range of IPAs of various strengths. I planned to throw myself firmly into the fight armed with an array of darker beers, firmly intent on mixing my drinks in a dangerous fashion. I had decided against following the instruction to drink water between each drink, as nothing ends a drinking session for me quicker than getting bloated. I kicked off the night with Guinness, which always gives me terrible hangovers and leaves me with a stomach like the aftermath of the Somme, and then followed that with a bottle of Old Tom, taking the required pill with the first gulp of each drink.

Old Tom packs a punch, a delicious 8.5% abv ale which has won a million awards for being the best beer ever, and I had a few beers of a similar strength lined up to follow it. I had decided earlier that this experiment would be an exercise in “testing to destruction”, in case it’s not obvious!

I followed this with Innis & Gunn Rum Finish beer, a 7.7% abv night-finisher, then piled three different kinds of brown ale on top of it. I had reached the point where I was certain a hangover would appear when my friend began to force cider down my neck, using such forceful language as “would you like some cider, mate?” and I was sure I would be ruined the next day.

Bear in mind that I was live-tweeting my experiments with Alcotox. Here’s the last tweet I made that night.

The next morning I was fine. FINE! I felt amazing. On the way home the previous night I sent my friend a private message on Facebook that went a little something like this “Natw can I come poverty tintype and gerty my phone charger,? Love you maaaan” and now I was unbelievably fresh! I was quite thirsty, but I wasn’t even approaching the level of cottonmouth I normally get on a hangover. I didn’t have a headache. I wasn’t nauseous.

On returning from my friend’s house I have it on good authority from my fiancee that I tried to take the end of the night double dose but coughed the pills up, but she was clear that I didn’t vomit and I’m sure this was down to nothing more than the coating making them stick to my tongue. On a second attempt I managed to down the last two pills of the night, and then went to bed. I woke up with a bottle of Dr Thunder (Dr Pepper for the cash-strapped) next to my bed, but it was freshly opened with very little gone. Normally in an attempt to stave off a hangover I would have been hydrating like crazy before bed, and I would still have woken up feeling worse than this.

To play Devil’s Advocate I have to say that there were other variables at work, like the fact I had played sports that day and I rarely, if ever, have a night of drinking after exercise. This might have had some kind of effect on my metabolism which helped me fight off the hangover. I also walked home, which I rarely do due to having a regular designated driver on nights out, and again this might have helped in some way.

Taking this into consideration, I have to put my neck out and say that after taking Alcotox through a night of drinking I woke up without a hangover. I have another night out planned soon and I’ll be doing my best to not get beaten up by bouncers as I continue to publically test Alcotox. Maybe after this next one I’ll be able to put my hand on my heart and announce Alcotox as a wonder-drug, but not yet.

1: Alcotox comes in packs of 30 pills for £14.99; we received sample packs with slightly different labels.

2: Alcotox are creating a liquid format to enable the consumer to do away with the problem of swallowing pills. More information can be found here.

3: We aren’t scientists, as has already been said (and is repeated in the video below). Therefore, we’re grateful to the makers of Alcotox for providing some further information concerning the difference between everyday, garden variety multi-vitamins and Alcotox pills. Rather than edit this and make a hash of science, I have quoted the makers directly:

“Alcotox does contain vitamins but very specific ones like vitamin B1 which is rapidly destroyed by alcohol.  Each capsule of Alcotox contains a large dosage of 100 mg of vitamin B1 just to replace what is being destroyed for example. Take a well known brand like Centrum multivitamin – if you click on the link you will see it only contains 4.1 mg of vitamin B1. Alcotox contains almost 25 times more – for the simple reason we know that 4.1mg will be destroyed with just one sip of alcohol. So one would have to take 25 centrum multivitamins to have the same dose of B1. Clearly this would be even more impractical. Moreover the expectation of consuming water and multi-vitamins to reduce the effect of hangover may be tempting and may even work to some degree. However the multi-vitamin would not be able to bind the acetaldehyde toxins which of course is the central issue.