When alcohol is consumed, it passes from the stomach and intestines into the blood stream. It is then metabolized by two enzymes—alcohol dehydrogenase (ADH) and aldehyde dehydrogenase (ALDH). These enzymes, which are central components of alcohol metabolism, help break apart the alcohol molecule, making it possible to eliminate it from the body. First, ADH metabolizes alcohol to acetaldehyde, a highly toxic substance and known carcinogen. Then, acetaldehyde is further metabolized into the less harmful acetate, which is eventually converted to carbon dioxide and water. 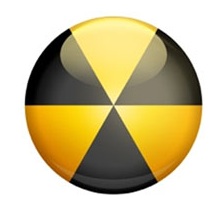 Although acetaldehyde is short lived, usually existing in the body before it is further broken down into acetate, it has the potential to cause significant damage. This is particularly evident in the liver, where the bulk of alcohol metabolism takes place. Some alcohol metabolism also occurs in other tissues, including the pancreas and the brain, causing damage to cells and tissues. Additionally, small amounts of alcohol are metabolized to acetaldehyde in the gastrointestinal tract, exposing these tissues to acetaldehyde’s damaging effects. 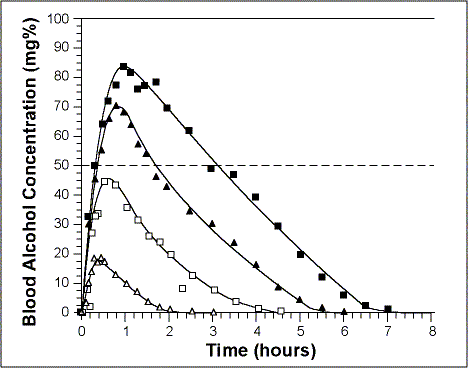 The BAC (blood alcohol concentration) curve below peaks within 30 to 45 minutes after the consumption of one standard drink. (A standard drink is defined as 12 ounces of beer, 5 ounces of wine, or 1.5 ounces of 80-proof distilled spirits, all of which contain the same amount of alcohol.)

The liver can only metabolize on average, one standard drink per hour, regardless of how much has been consumed. The rate of alcohol metabolism depends on the amount of metabolizing enzymes in the liver, and individual genetics.

What is important to note is that alcohol is metabolized more slowly than it is absorbed. Since the metabolism of alcohol is slow, consumption needs to be controlled to prevent accumulation in the body and intoxication. The liver is easily overwhelmed for this reason and the body has trouble keeping up with removing acetaldehyde fast enough.The prolonged exposure to acetaldehyde can result in significant damage to cells, tissue and DNA.